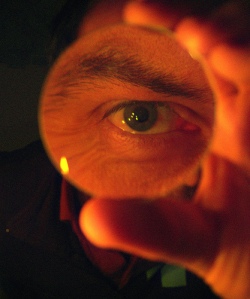 I recently watched the movie Sherlock Holmes (2009) and was intrigued by how Holmes was portrayed as an intuitive.  His observations went beyond a keen eye for detail to solve a crime, revealing information one cannot detect with the five senses.  One scene in particular I found to be a perfect example of several aspects I have experienced as an intuitive.  He is invited to meet his partner Dr Watson’s fiancée Mary over dinner and is very resistant to losing his friendship to this woman.  When Mary pushes Holmes to tell her what he “sees” in her, he refuses but upon her prodding agrees.  His revelations of her past at first seem innocent then touch on the more tender aspect of a past love loss.  She reacts to his heartless approach by tossing a glass of wine in his face and stomps out of the restaurant.

This scene beautifully demonstrates the complex motivators and responses one can experience when sharing intuition.  The first skill Holmes models is respect of others by confirming their approval to be seen, he only read Mary with her permission and insistence.  In his detective work the permission to read comes from righting-a-wrong by revealing hidden information used to harm people.  Second, his personal agenda got in the way.  He was jealous and concerned that Watson’s relationship was changing the routine they enjoyed as partners in solving crime.  He used the opportunity to create conflict for his friend by delivering the information from a point of judgment rather than neutrality.  This heartless approach was hurtful to Mary.  While Mary acknowledged his read was perfectly accurate she responded by lashing out from her pain.  A glass of wine in Holmes face accompanied by an energetic whack was the punishment for speaking information that was outside of her comfort zone.  Holmes’ intent to create a divide between Mary and Dr Watson backfired and instead created a divide between himself and Watson, who felt inclined to protect the woman he loved from pain.

In such a short scene we are shown how important it is to check our intention before we deliver information even when it is asked for or demanded from someone in our life.  Holmes demonstrates overtly seeking permission to avoid disrespect of a person’s privacy by reading them against their will.   Throughout the movie Holmes expresses his lack of belief in magic and proves that the supposed magic being performed by the villain is simply many cases of creating illusion, manipulation of perception psychologically, with money or science.  Yet Holmes uses intuition in his detective work, tapping into non-scientifically proven sixth-sense awareness.  By doing so he validates intuitive information as part of the material world not the mystical one.